Skype for Business - Why Can't I Escalate to a Conference?

I had a customer a few weeks ago that could not escalate to a conference. They were having a P2P call with someone, tried to add a third user to the conversation and received an error each time. The problem had been going on for about a week and they asked if I could take a look and see what was going on.

I'll admit, I've heard of this issue before, but I had not seen it yet. I started parsing the Lync Event Log on the FE server and noticed a lot of the following SQL Errors:

The 'General' tab included more data, but here is the most pertinent thing we need to focus on:

The transaction log for database 'rtcxds' is full due to 'LOG_BACKUP'.

I'm not a SQL expert, but shouldn't there be a way to increase or decrease the size of the logs? Well, there is, but it turned out to be more convuluted than I had hoped.

I logged onto the BE SQL server where the rtcxds database is located. I right clicked on the database, went to 'Properties' -> 'Files' and then clicked on the '...' button for the log file. Since there was plenty of space on the disk, I tried to increase the size of the log file from 10 GB. I received the following error:

Yeah, understood. That's why I'm trying to increase the size, so work with me here, ok? 😉

After some Googling, I found that I have to take a backup before increasing the size. However, after talking with the customer, they're taking pretty frequent backups already. So, is there a way to take a back without really taking a backup? Yes, of course!
backup log
dname TO DISK = 'NUL:'; (note: just one 'L' is correct)

Entering the above two lines into a sql query (sans my note: on line two) within SQL Server Managment Studio tells SQL to write a backup to 'Null'. As far as SQL is concerned, a write happened, so we're all good.

After running the query above I was able to increase the size of the log file location and the customer confirmed they could escalate to a conference again. I checked the Lync Event Logs on the FE server and noticed the following message:

Skype for Business Online - Why Aren't Agents Receiving Calls in a Call Queue?

I have been helping a client set up Skype for Business Online Call Queues. This morning, they told me they were able to call the service number associated with a queue and hear the greeting, but none of the agents in the queue received the call.

Normally, this just works. I logged into their tenant and didn't see anything suspicious in their queue or group setup. Also, all the users in a queue they were testing with had Cloud PBX licenses applied.

I was grasping for straws, but I decided to check the 'external communications' settings on the tenant. I noticed the client was whitelisting companies to federate with, but they did not include their own domain. Should you have to allow your own domain? Well, if you're whitelisting domains on your tenant, turns out the answer is 'yes' (you'll also need to allow Microsoft as well). 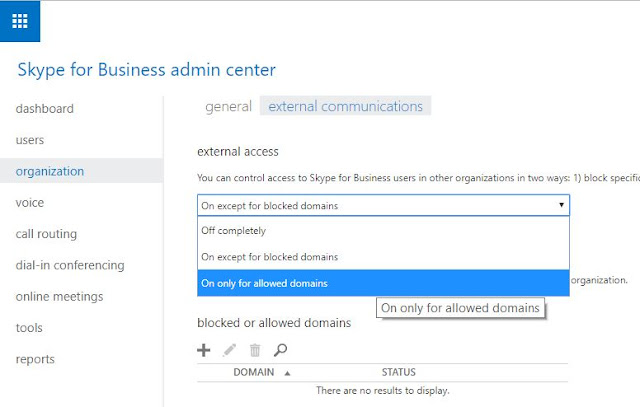 Under the 'blocked or allowed domains' section, click the '+' button to add both your domain name and Microsoft's domain (microsoft.com). I had the customer add their own domain (microsoft.com was already allowed) and wait approximately one hour. Afterward, they tested several of the queues they had setup and they worked. All agents in each queue received the call in their respective client.

Josh Crabtree (UCCrab) is a UC Engineer at Exeter Finance. This blog shares his field notes as he deploys and supports various UC technolgies. Josh resides in Dallas,TX with his wife and dog.