Office 365 Oddity - Why Is the S4B Dial-In Conferencing Number Showing Up Twice?

Well, this is odd.

I was helping a customer in an Office 365 Hybrid Deployment. They decided to go with S4B on prem and Exchange in the cloud. The customer tested scheduling a S4B Meeting and noticed the following: 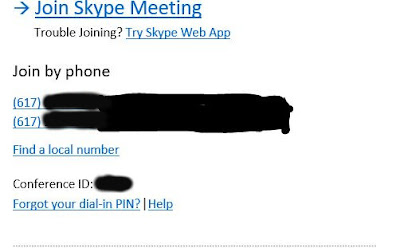 (Dial-In Conferencing Numbers are blacked out, but trust me, they're the same. ;) )

Why is this a thing?

I wasn't for certain, however, my best guess was this was either being caused by the O365 Pro Plus Client or Exchange. Time to troubleshoot!

I checked S4B Technet Forums and found a post from another user regarding this same issue. I followed the advice in the post above and had the customer schedule a meeting through OWA rather than through their client. Low and behold, scheduling the meeting through OWA listed the dial-in conferencing number once. Alright, now I'm getting somewhere, but what's going on with the client?

The customer was running the most recent O365 First Release Deferred Channel Version (v 1701 as of June 2017). There is a more recent release in the O365 Current Channel (v 1705), but it requires switching channels and running what is essentially a beta version.

NOTE: You cannot revert channels when switching from 'Deferred' to 'Current'. I talked it over with the customer and stated the risks. He agreed to switch channels and do the upgrade. Here is a link that walks through switching from Deferred Channel to Current Channel.

After the upgrade, the customer confirmed that the number is no longer listed twice. I let the customer know that his colleagues on Deferred Channel should see the update in approximately four months according to the O365 Channel Release Schedule.

Uggh... how annoying. Why do you hide things from me, PowerShell?

Thankfully, this is easy to correct. There is an environment variable in PowerShell for 'EnumerationLimit' (i.e. the number of items enumerated to the screen during a session):

Setting this variable to -1 essentially allows for unlimited enumeration.

Josh Crabtree (UCCrab) is a UC Engineer at Exeter Finance. This blog shares his field notes as he deploys and supports various UC technolgies. Josh resides in Dallas,TX with his wife and dog.